Below is a list of anti-racism resources, articles, quotes, media, and guides based on the that Introduction to Racism and White Privilege Course curriculum layout.  To add additional resources or feedback to this list please email peoplesschooldc@gmail.com.

“The problem is that white people see racism as conscious hate, when racism is bigger than that. Racism is a complex system of social and political levers and pulleys set up generations ago to continue working on the behalf of whites at other people’s expense, whether whites know/like it or not. Racism is an insidious cultural disease. It is so insidious that it doesn’t care if you are a white person who likes Black people; it’s still going to find a way to infect how you deal with people who don’t look like you.

Yes, racism looks like hate, but hate is just one manifestation. Privilege is another. Access is another. Ignorance is another. Apathy is another, and so on. So while I agree with people who say no one is born racist, it remains a powerful system that we’re immediately born into. It’s like being born into air: you take it in as soon as you breathe.

It’s not a cold that you can get over. There is no anti-racist certification class. It’s a set of socioeconomic traps and cultural values that are fired up every time we interact with the world. It is a thing you have to keep scooping out of the boat of your life to keep from drowning in it. I know it’s hard work, but it’s the price you pay for owning everything.” Scott Woods

James Baldwin tells the story of race in modern America in “I am Not Your Negro” based on his unfinished novel, “Remember This House”.  Watch entire movie

Below is a continuation of education from the

Click on each link to learn more.  If there’s no hyperlink the resource page has not been developed yet but will soon.  If you want to help develop these resource pages please email dcpeoplesschool@gmail.com.

Solidifying Segregation and Inequality in the US
History of Segregation, Desegregation, and Re-segregation • White Resistance and Spatial Racism • Housing Discrimination

National organizations that host anti-racism workshops across the country

Readers Guide to White Fragility: Why It’s So Hard For White People To Talk About Racism
Reading guide is intended to support formal and informal discussions of White Fragility 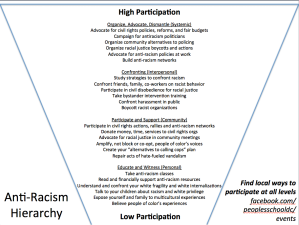 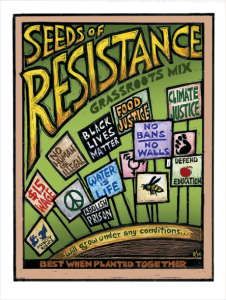